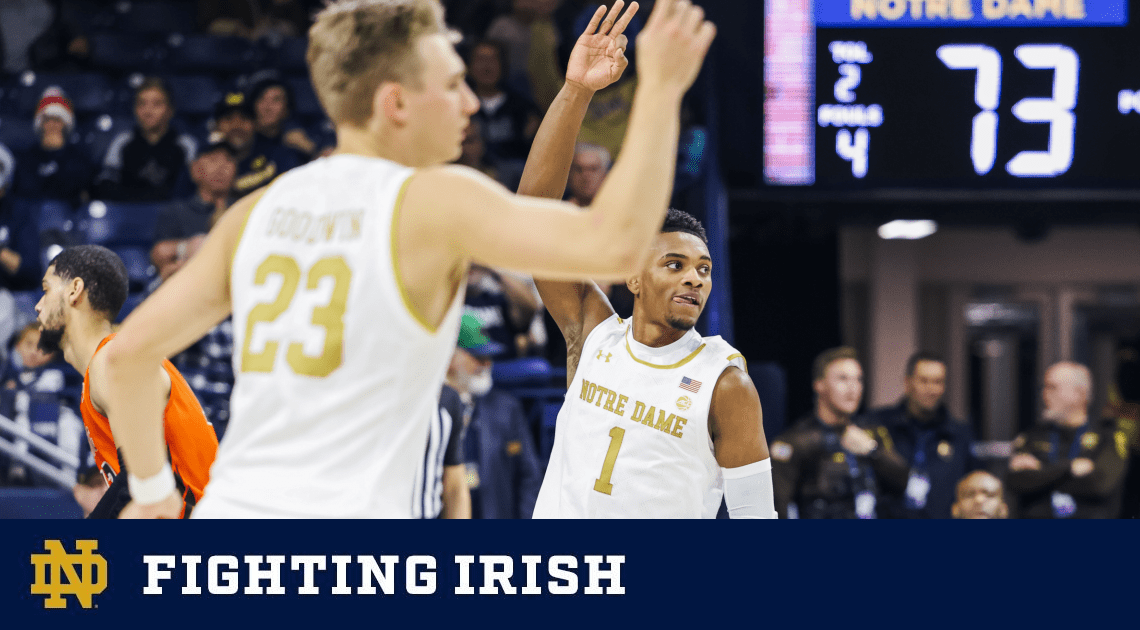 SOUTH BEND, Ind. – The Notre Dame men’s basketball team (5-0) finished off the season-opening five-game homestand in high fashion, rolling to an 82-66 victory over

Bowling Green (2-3) on Tuesday night. The Fighting Irish ended the game on a 23-5 scoring run, shooting 65.4 percent in the second half.

Notre Dame freshman guard JJ Starling poured in a career high 23 points on a near perfect night, 10-for-11 from the floor. He also added six rebounds and three assists. In addition, he wasn’t the only freshman to shine bright tonight, as Ven-Allen Lubin produced a career high 12 points on 6-of-9 shooting, plus four boards and two assists.

Nate Laszewski notched his second 20+ scoring effort of the season and eighth of his career with 22 points on 6-of-10 shooting. He was also 6-for-6 from the free-throw line. Dane Goodwin recorded his fourth straight game in double figures with 11 points on 4-of-9 shooting, plus six rebounds.

JJ Starling flashed his athleticness early – in a 14-second stretch the freshman recorded a jumper in the paint, then stole the ball after the in-bounds pass and made a driving layup for a quick four points.

Fellow freshmen Ven-Allen Lubin got in on the fun and later scored a quick four points as well as the duo boasted 10 of the team’s 20 points at the 11:09 media timeout up one.

The Irish were later up 37-31 with 2:57 left till halftime and that’s when Bowling Green fired off a 9-2 run to gain the lead. However, Notre Dame got the upper-hand with 1.4 seconds on the clock when Laszewski buried a three to give the home squad momentum and a 42-40 halftime lead.

Ultimately, the first half featured nine lead changes and one tie, though the Irish led for over 16 minutes in the half.

Lubin had already achieved a career high 10 points at the midway point, and along with Starling, combined for 19 points. Yet, it was Laszewski driving the Irish offense yet again, leading with 17 points which included a 3-for-5 mark from three.

Tied 46-all at the 17:50 mark, the Fighting Irish ignited with a 7-0 run spanning 62 seconds (four points from Starling and a Wertz three), forcing a Bowling Green timeout.

In fact, the Irish recorded a stretch in which they made eight of their next nine shots to garner a 59-54 advantage at 13:59.