Louisville Shows Fight, but Comes up Short against South Carolina 72-59 in Final Four 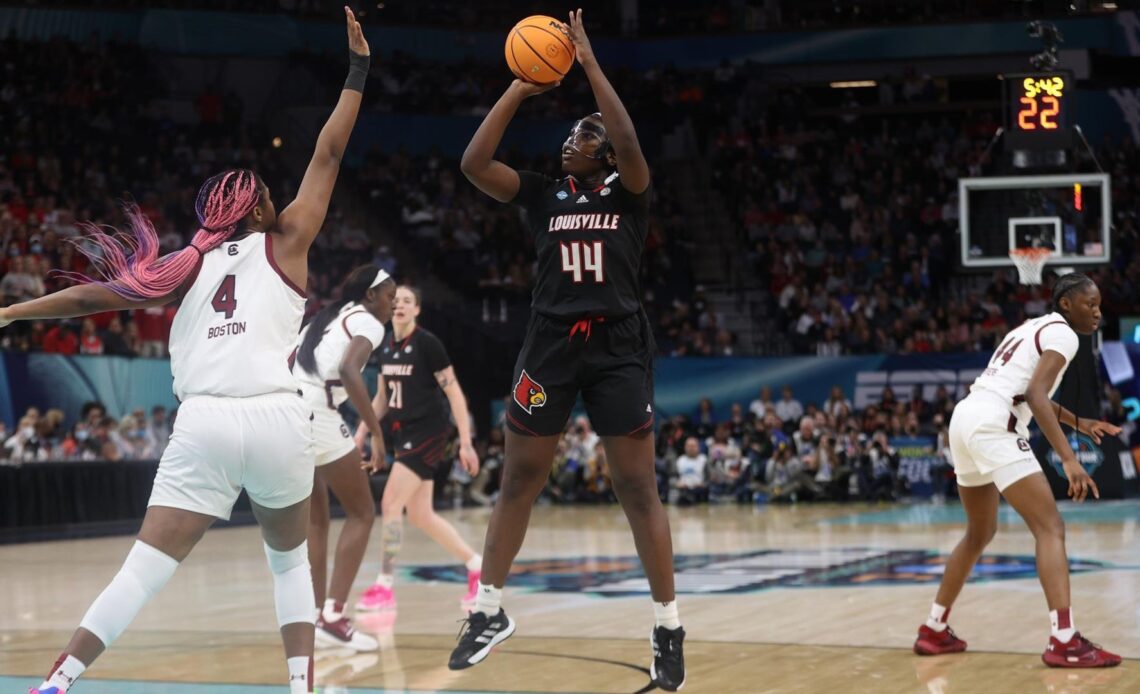 MINNEAPOLIS – Emily Engstler had 18 points, while Kianna Smith and Olivia Cochran chipped in 14 each, as University of Louisville women’s basketball consistently fought back but came up short 72-59 to top overall seed South Carolina on Friday night at the Target Center.

”I’ve never been prouder of a group,” head coach Jeff Walz said. ”They’ve absolutely been a joy to coach.”

South Carolina jumped out to an early 7-0 lead and Walz called timeout at the 5:30 mark of the first quarter after the Gamecocks extended the lead to 11-2.

Louisville trailed 17-10 after the first quarter and then went on a 12-0 run at the beginning of the second to take a 22-19 lead on Smith’s jumper.

The Gamecocks answered with a 15-6 run of their own and after scoring back-to-back buckets at the end of the half took a 34-28 lead into the break.

They extended that lead to 15 at 51-36 with 5:47 to go in the third quarter, but the Cardinals responded again.

Smith scored four consecutive points and Mykasa Robinson hit an off-balance jumper in the paint to trim the lead back to 54-48 with under a minute to go in the quarter.

But, with four seconds remaining in the third, Engstler was called for her fourth foul as Aliyah Boston converted the and-one to take a 57-48 lead into the final frame.

The Cardinals would not get closer than nine points the rest of the way.

Boston had 23 points and 18 rebounds to lead the Gamecocks, while Brea Beal matched her season high with 12 points.

Engstler fouled out midway through the fourth quarter and had a team-high 18 points on 8-17 shooting, while adding nine rebounds and four steals. She had 10 points and seven rebounds at the end of the first half.

Smith had 14 points and consistently hit tough shots to keep the Cardinals in the game, while Cochran finished with 14 points on 6-11 shooting, while adding four rebounds and three steals.