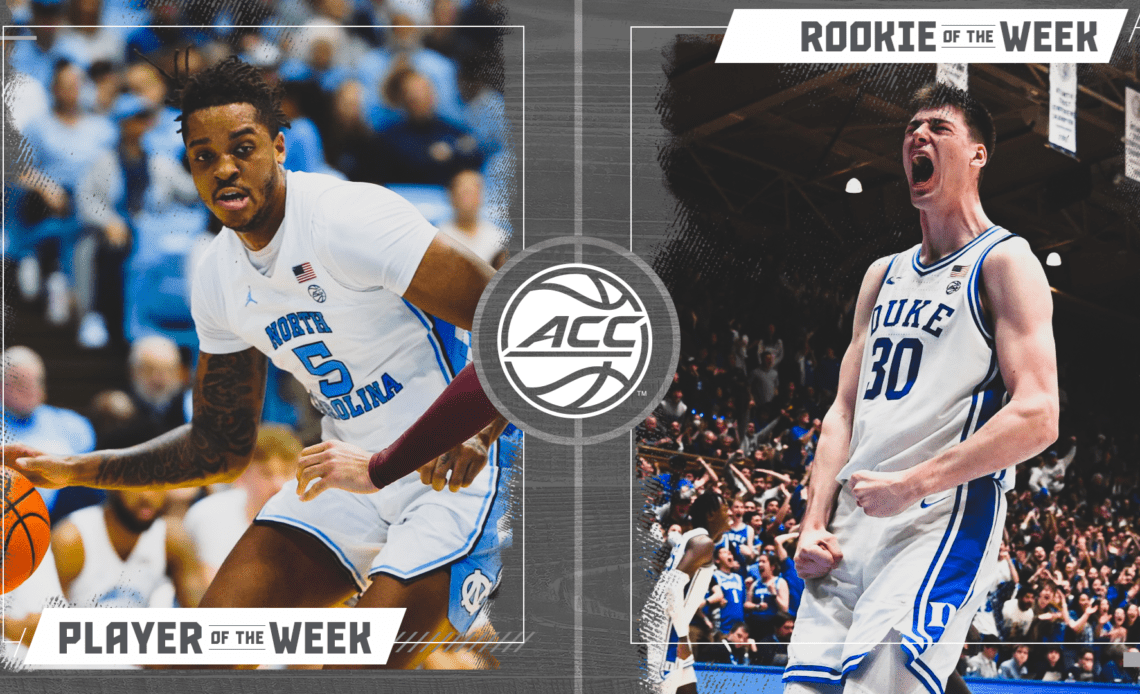 
GREENSBORO, N.C. (theACC.com) – North Carolina senior center/forward Armando Bacot was named Atlantic Coast Conference Men’s Basketball Player of the Week for the third time this season, while Duke’s Kyle Filipowski was selected as the ACC Rookie of the Week for the sixth time.

ACC men’s basketball weekly honors are determined by a vote of a 15-member media panel and announced on Mondays throughout the regular season.

Bacot averaged 21.5 points and 17.0 rebounds in North Carolina’s wins over Boston College and NC State. He recorded 20 points and 16 rebounds versus BC and 23 points and 18 boards against the Wolfpack. They were his 11th and 12th double-doubles of the season and second and third straight games with at least 15 rebounds. In the win over NC State, he set UNC all-time records for rebounds (1,221) and double-doubles (61). A native of Richmond, Virginia, Bacot moved to eighth in ACC history in all-time rebounds and a tie for seventh in double-doubles. The 23-point, 18-rebound game versus NC State was his 20th career game with at least 20 points and 10 rebounds. It also equaled the most rebounds by a Tar Heel ever against NC State, a record he originally tied in February 2022, the last time the teams met in Raleigh.

With his sixth Rookie of the Week selection this season, Filipowski already is tied for the seventh-most in a season in league history. The native of Westtown, New York, scored 17 points and pulled down 14 rebounds in the Blue Devils’ Saturday victory over No. 17 Miami. It marked his third straight double-double and ninth this season. He also dished out two assists, had two steals and blocked a shot. He has posted three consecutive games with at least 17 points and 14 rebounds (nine defensive), becoming the first Blue Devil since Marvin Bagley III in 2017-18 with three consecutive games of at least 17/14. Filipowski has scored 63 points (21.0) and grabbed 43 rebounds (14.3) over Duke’s last three games, which all came against teams that entered the game in first or second place in the ACC (Pitt, Clemson, Miami).