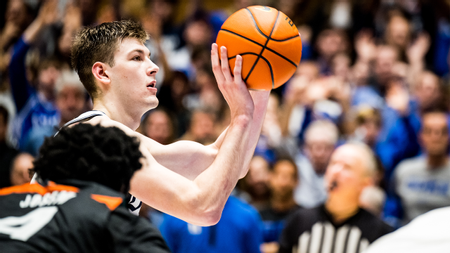 
DURHAM — After another double-double last week, Duke’s Kyle Filipowski has been named the ACC Rookie of the Week in men’s basketball for the sixth time this season and for the second week in a row. The freshman was also named Duke’s PNC Achievers Student-Athlete of the Week for the first time in his career.

The Westtown, N.Y., native finished with 17 points and 14 rebounds in Duke’s only game last week — a 68-66 victory over then-No. 17 Miami. Filipowski added two assists, two steals, a blocked shot and was 6-of-8 at the free throw line, including 4-of-4 in the game’s final 2:05 to help seal the victory.

The double-double was the ninth of Filipowski’s career and his third consecutive game with at least 17 points and 14 rebounds, becoming the first Blue Devil since Marvin Bagley III in 2017-18 to record at least three consecutive games with at least 17-14. The nine double-doubles are top-15 nationally and the most by any freshman in the country. Over Duke’s last five games – which has included three road games – Filipowski is averaging 18.4 points and 12.0 rebounds and shooting .417 in that stretch. The freshman is averaging 15.0 points and 10.0 rebounds in ACC play, joining three other players — North Carolina’s Armando Bacot, Florida State’s Matthew Cleveland and Clemson’s Hunter Tyson — averaging at least 15-10 in conference play this season.

The PNC Achievers is a student honors platform that is active at nearly 20 schools and universities across PNC Bank’s service area. Honorees are selected locally by designated panels at each respective school, using a set of criteria that includes athletic accomplishments, academic achievement, community service and student leadership.