Race Thompson steps up, wears crown of cotton in hard-fought win over Little Rock – Inside the Hall 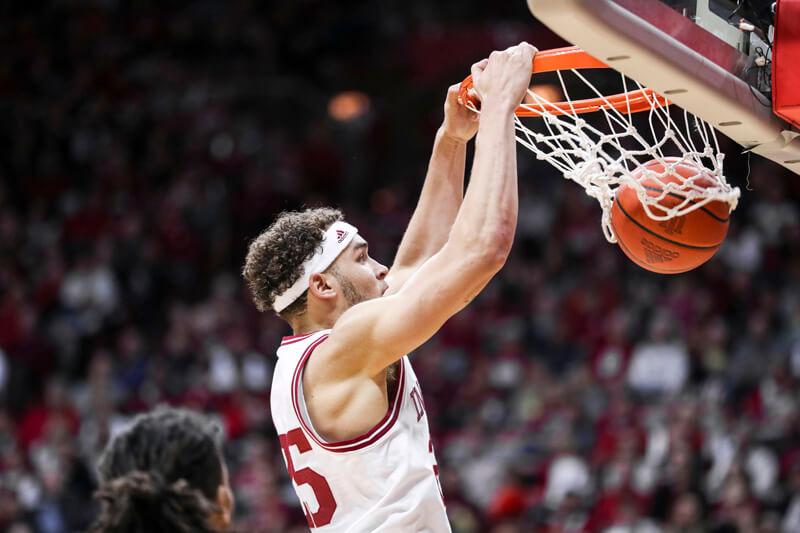 In a game that didn’t go as smoothly as Indiana would have liked, one of the ugliest parts of the outing against Little Rock came when Race Thompson got up off the floor with blood dripping from his forehead.

Struck in the head by an errant elbow while going up for a rebound in the first half, Thompson hit the floor of Simon Skjodt Assembly Hall hard enough to quiet the energetic crowd. As he got to his feet, a bright spot of red adorned the crown of his head.

With a towel to his forehead, Thompson exited to the locker room, leaving everyone wondering what his status was, and what it could mean for Indiana for the rest of the night. At that point in the game, Thompson already scored four points and was causing problems for Little Rock around the net.

Continuing his style of play from the Hoosiers’ bouts with Xavier and Miami (OH), Thompson attacked the rim with a fervor that made some question what it had ever done to him. His early buckets drew some of the largest cheers of the night, and he was embracing the role he was playing for the team.

“Out of all the players we’ve had, he’s made a major jump for us,” Woodson told Don Fischer in the beginning of November on his weekly radio show. “That means he’s put the time and work in.”

Trayce Jackson-Davis sat out of Wednesday’s game for precautionary reasons, and eyes turned to Thompson to pick up in his absence, especially around the basket. Credited as the two leaders on the team, both are expected to carry the team when needed.

And while the Hoosiers may have missed Jackson-Davis’ presence at times, everyone stepped up and filled the hole with relative ease. Thompson was one of the biggest to do so.

“You’ve seen what we can do with or without him,” Thompson said about Jackson-Davis’ absence. “That’s why this team is special.”

Thompson showed his capability of doing whatever he needed to when he returned to the game, just minutes after leaving holding that bloody towel, with the same energy and tenacity he has had all season.

The second half marked the big turning point for Thompson, and in turn, the entire Indiana team, as they eventually cruised to an 87-68 win Wednesday night.

The symbol of the game? A white headband.

Instantly recognizable from even the highest seats of Assembly Hall, Thompson took the floor in the second half with a crown of cotton. By the end of the game, he had more than earned it.

Thompson scored 16 points in 16 minutes in the…