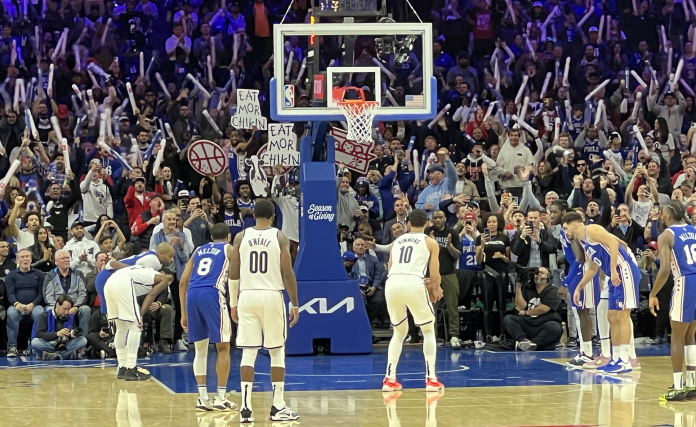 The Sixers (8-8) hosted the Brooklyn Nets (8-9) on Tuesday. Philadelphia wanted to right its wrongs from Saturday’s loss to the Timberwolves. Brooklyn wanted to extend its winning streak to three games. The Sixers put forth a full team effort to upset the Nets in Ben Simmons’ first game in Philadelphia, 115-106.

Before we get to what I saw, some notes.

The Nets were without the services of TJ Warren, who is recovering from a left foot injury.

Yuta Watanabe missed the game with a tight right hamstring.

Alondes Williams is on a Two-Way assignment with Brooklyn’s G-League affiliate and was unavailable.

The Sixers were without Joel Embiid, who has a sprained left mid-foot. James Harden was out with a strained right foot. Tyrese Maxey has a small fracture in his left foot and was unavailable.

Jaden Springer has a strained right quad and was out.

Aside from the early outburst from Claxton, the Sixes did an impressive job of resisting Brooklyn’s efforts to score in the lane. The Nets were able to get movement around the paint, namely from Simmons operating out of the short roll or driving, or Durant flashing to the elbows for catch-and-shoot jumpers. But, if the Nets dared try to push too deep or put the ball on the floor by the basket, the Sixers swarmed them, forcing misses up close or live-ball turnovers. They didn’t just roll over and concede their disadvantage with Embiid out.

The Sixers had a very hot start from three, canning five of their first eight attempts. That shooting helped them turn an early eight-point deficit into an 11-point lead early in the second quarter. Kudos to them for keeping it interesting past the opening tip despite the stardom disparity.

Look no further than Paul Reed for some oomph off the bench. He picked the right time to have the best game of his career, at least offensively. On defense, he made some strong help rotations, stepping up in space to confront potential drivers and forcing them to swing the ball to someone with a better angle. He met feeble layups from the likes of Joe Harris at the rim, spiking them to the hardwoods and. getting Philadelphia out on…