Watch Manu Ginobili be inducted into the Hall of Fame 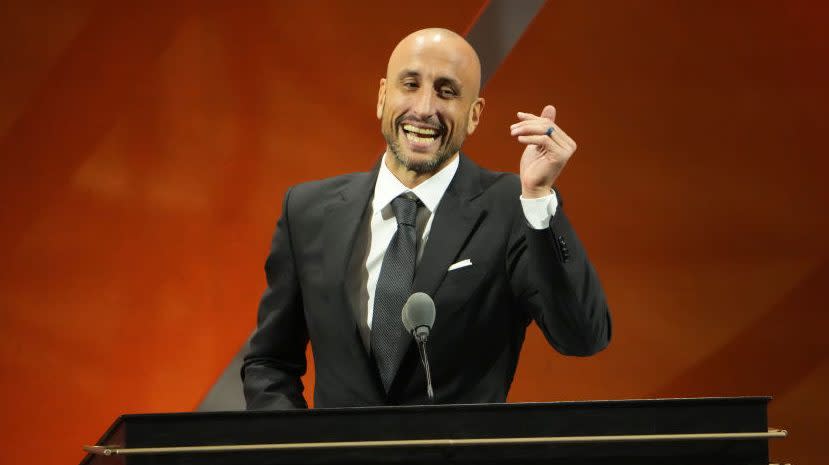 He was drafted No.57 by the Spurs, and even after that spent three more years playing in Italy before coming to San Antonio. He came off the bench in 67% of his NBA games. He was not near the most physically gifted player in the league, averaging 13.3 points per game for his career.

It’s an unusual resume for a Hall of Famer — but Manu Ginobili is unquestionably deserving of being in the Hall. Saturday night he was inducted.

“I’m not here because I was special,” Ginobili said. “I’m here because I was part of two of the most important teams… the Spurs winning four NBA championships and with my Argentinian national team winning [Olympic] gold in 2004.”

Ginobili sells himself short — he was special. Kobe Bryant called him one of his favorite people to compete against. Ginobili was a four-time NBA champion with the Spurs Sixth Man of the Year (2008), a two-time All-NBA player and a two-time All-Star. Ginobili isn’t just a Hall of Famer for his NBA play — he led Argentina to its only basketball gold medal at the 2004 Olympics. He is one of only two players to have won a EuroLeague title (2001), an NBA championship and Olympic gold (Bill Bradley is the other).

“The crazy thing about my career is that, while all this was happening with the Spurs, at the same time I had another career. And it was… as exciting and as fun as the one with the Spurs, and it was with my Argentinian national team,” Ginobili said.

Check out the latest on the Lakers

Report: Suns, Lakers, Mavericks, Knicks all interested in Bojan Bogdanovic… Report: Russell Westbrook did not ask for a trade but remains open to one Shaq says Westbrook was “showing too much respect” last season

Watch Manu Ginobili be inducted into the Hall of Fame originally appeared on NBCSports.com