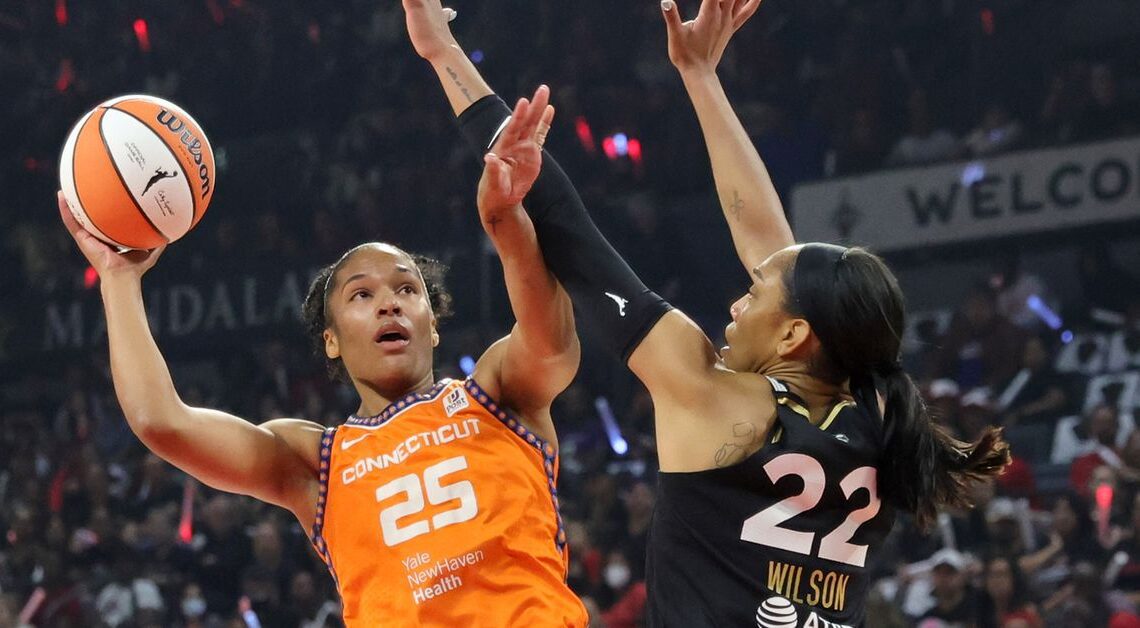 The Las Vegas Aces have been a crunch-time execution machine over the past week. That machine hit a few snags in Game 1 of the WNBA Finals, but the Aces still dialed up a sensational final defensive possession to hold off the Connecticut Sun 67-64 and take a 1-0 lead in the series.

A’ja Wilson led the way with 24 points, bolstered by 14 trips to the free-throw line, along with 11 rebounds, four blocks, and two steals. Chelsea Gray added 21 points, and a surprise second-half appearance from Dearica Hamby helped turn the tide of the game in the third quarter, as Las Vegas erased a halftime deficit.

It didn’t look like the Aces would need to mount a comeback at the beginning of the game. During the first quarter, it seemed like the four days between the WNBA semifinals and Finals did nothing to cool off Wilson and Gray. Las Vegas made its first five shots, part of 9-of-16 shooting in the opening period, and Gray hit a high-arcing pull-up three-pointer (stop me if you’ve heard this before) six minutes into the quarter to put the Aces up 21-9.

Wilson was similarly unstoppable, getting to the cup past 6’6 Jonquel Jones with minimal difficulty to the tune of 12 points in the first quarter, more than her Game 1 outputs against both Phoenix and Seattle. Wilson was also critical to keeping the Sun off the offensive glass early, as the best offensive rebounding team in the league was limited to one second chance in the first quarter.

Connecticut got back into contact once Bri Jones entered the game, but Las Vegas was perfectly happy to concede midrange jumpers to Jones rather than allow to her set up shop near the basket.

An eight-point lead at the end of the first quarter made Becky Hammon comfortable enough to take both Gray and Wilson out to start the second. Things started to unravel from there in the half-court offense, and the double Jones combo for the Sun got Connecticut going on the boards. Seven offensive rebounds led to eight second-chance points, and Wilson found herself stifled by a new defensive matchup in Alyssa Thomas. Whereas Jonquel Jones’ length did little to fluster Wilson, Thomas’ strength as she worked to push Wilson off her spot did more damage.

Natisha Hiedeman also upped her defensive pressure on Gray. The Aces managed just nine points in the second quarter, with four turnovers compared to three made baskets. The Sun got them stuck in the mud.

The M’VP was determined to change that in the second half, and she…