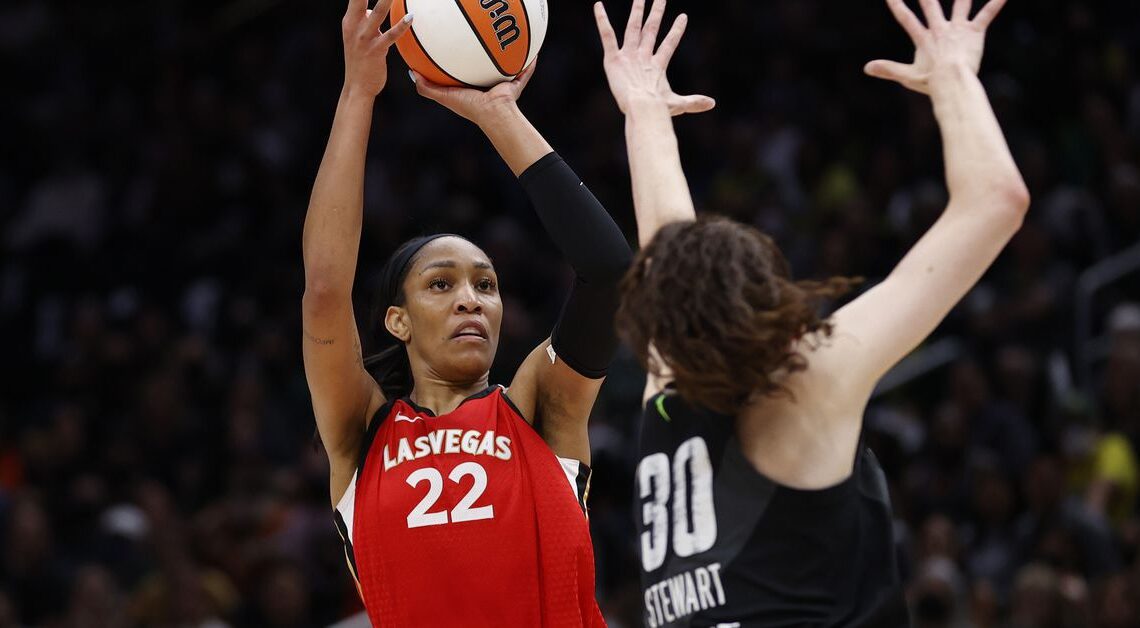 The WNBA announced on Wednesday that A’ja Wilson of the Las Vegas Aces has been named the 2022 Most Valuable Player.

Wilson is now a two-time MVP, having also won the award in 2020. The only other players in WNBA history who have won multiple MVP awards are Sheryl Swoopes (3), Lisa Leslie (3), Lauren Jackson (3), Candace Parker (2), Elena Delle Donne (2) and Cynthia Cooper (2).

Wilson won a tight race against Seattle Storm forward Breanna Stewart, the 2018 MVP. She received 31 first-place votes to Stewart’s 23, but Stewart received four more second-place votes and four more third-place votes to finish just 32 voting points behind Wilson (478 to 446). Both Wilson and Stewart surprisingly only made 55 of 56 ballots, which each consisted of a Top 5.

Plum led the Aces in scoring with 20.2 points per game, while Wilson was second with 19.5, making Wilson the first player in WNBA history to win the regular-season MVP award without leading their team in scoring.

Wilson was fifth in the league in scoring, second in rebounding with 9.4 boards per game and first in blocks with 1.9 rejections per game. She was also 12th with 1.4 steals per game. Often found bragging about her assists when they do come, Wilson was good for 2.1 helpers per contest.

Wilson shot 50.1 percent from the field and added a 3-point shot to her game. She was 1-of-2 from beyond the arc in her WNBA career entering this season and 6-of-16 in four years at South Carolina. This year she made 31 threes at a 37.3 percent clip. Her free throw percentage was 81.3.

In addition to the numbers, voters had to take into consideration that Wilson was one of the best emotional leaders in the game this season. And the Aces went 26-10 to finish with the No. 1 seed entering the playoffs. Stewart’s Storm finished 22-14.

Wilson was named Defensive Player of the Year as well and that could have been seen as a tiebreaker between her and Stewart, that is if you thought Wilson was a better defender than Stewart, who received 13 votes for DPOY.

Stewart had a strong case as well. She led…