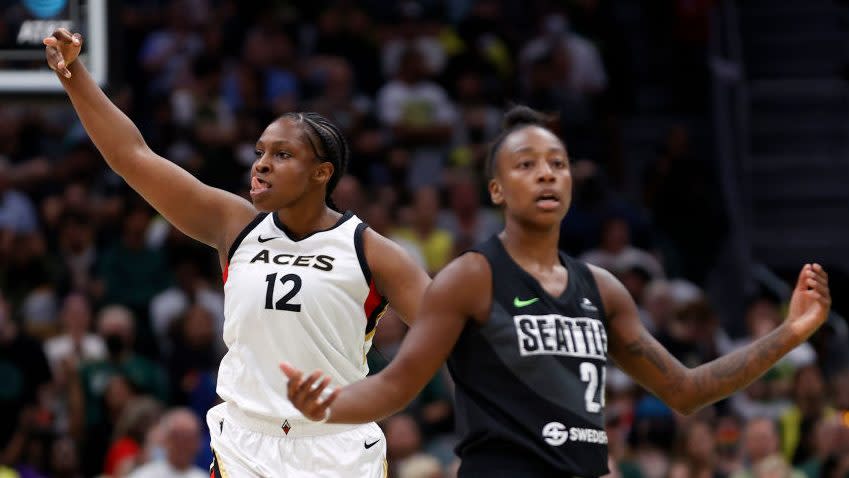 SEATTLE (AP) — Before she tried encapsulating one of the more memorable WNBA playoff games, Becky Hammon let out a little chuckle.

“That was a hell of a game. I don’t know if I’ve ever been a part of something like that,” the Las Vegas Aces coach said.

Hammon could speak with a mix of excitement and relief after the Aces pulled out a wild 110-98 overtime in over the Seattle Storm in Game 3 of their WNBA playoff semifinal series on Sunday.

There were big shots and buzzer beaters. Spectacular offensive performances, disputable missed calls and one glaring blown assignment by the home team that added up to the Aces being one win away from advancing to the WNBA Finals and ending Sue Bird’s career.

Jackie Young sent the game to overtime with a buzzer-beating basket, and then Chelsea Gray and Kelsey Plum hit big shots in the extra session as Las Vegas took a 2-1 lead in the best-of-five series.

“We live for these moments. You work hard for these bright light games and just staying in it and understanding that we’ve worked hard to get to where we are,” said Aces’ star A’ja Wilson, who finished with a playoff career-high 34 points.

The end of regulation will rightfully get most of the attention. But Las Vegas was dominant in overtime, outscoring Seattle 18-6.

Gray had been quiet in the fourth quarter but scored eight of her 29 points in overtime including a pair of 3s that silenced Storm fans that had been roaring only a few minutes earlier when it appeared Seattle was on the cusp of winning the pivotal game.

From the Seattle perspective, it never should have reached overtime.

Seattle led 92-90 with 0.8 seconds left in regulation after Bird hit a corner 3. It was a storybook moment to be another highlight in Bird’s final season before retiring.

But on the ensuing inbounds play, Young got free from Ezi Magbegor and scored in the lane ahead of the buzzer to send the game to overtime.

“It was really frustrating. We had the game and we gave it to them and that’s really it,” Seattle’s Breanna Stewart said.

Gray added 12 assists and Riquna Williams added a key 14 points off the bench. Plum had 16 points, including an important three-point play to start overtime for the Aces.

Stewart led Seattle with 20 points, while…