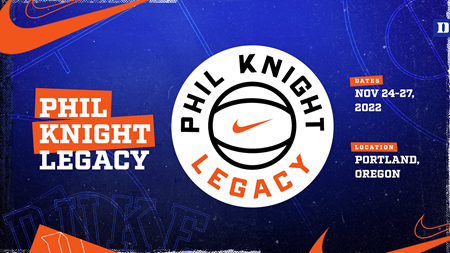 The Blue Devils open tournament play with a first-round matchup against Connecticut on Friday, Nov. 25 at 5:30 p.m., ET at the Chiles Center in Portland, Ore. The game will be broadcast live on ESPN2 or ESPNU. Duke and UConn have matched up 15 times previously, with the Feast Week contest marking the first since the 2018 NCAA Sweet 16.

Duke will square off against either Iowa or Oregon State on Sunday, Nov. 27 to close out tournament play. The championship game will be played at the Moda Center (1 p.m. ET, ABC), while the third-place game will be held at the Veterans Memorial Coliseum (10 p.m. ET, ESPN2).

The early season men’s and women’s college basketball events – born from the successful PK80 events that helped celebrate the 80th birthday of Phil Knight in 2017 – will once again honor the NIKE, Inc. co-founder and 2012 Naismith Memorial Hall of Fame inductee. The Phil Knight Legacy will be played at three facilities in Portland, Ore.: Chiles Center on the campus of the University of Portland, the Rose Quarter’s Moda Center and Veterans Memorial Coliseum.

The Blue Devils are set to open the 2022-23 season with an exhibition game against Indiana University of Pennsylvania on Saturday, Nov. 5 at 1 p.m., before welcoming North Carolina A&T to Cameron Indoor Stadium for the home opener on Monday, Nov. 7 at 11 a.m.