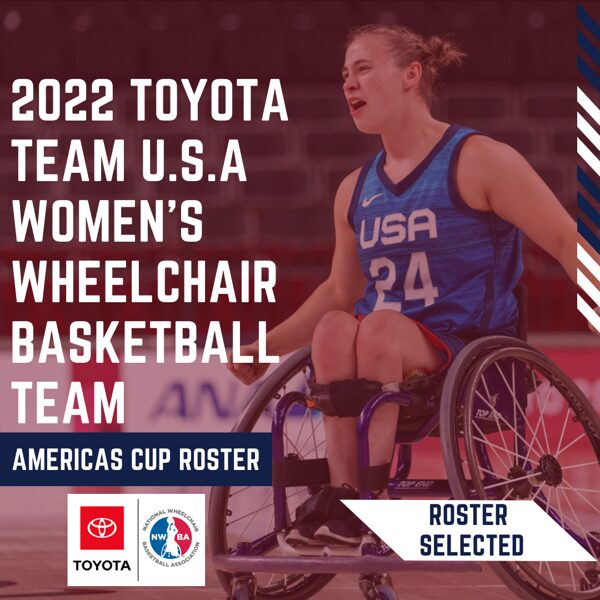 Christina Schwab, U.S. Women’s National Team Head Coach, gives her thoughts on selection camp, “My staff and I have seen tremendous growth and development with the level of play by the athletes during this selection camp. We have continued to work on team concepts and building an on-court relationship between all of the athletes playing together.”

This final roster will attend the 2022 IWBF America’s Cup in Sao Paulo, Brazil on July 9-19, 2022. The 2022 America’s Cup, hosted by IWBF Americas, will serve as the qualifier for the 2022 IWBF World Championships taking place November 16-27, 2022, in Dubai, United Arab Emirates. For the women’s division of 2022 America’s Cup there will be eight teams competing for one of the three team spots available for the IWBF World Championships.

Schwab offers comment on the U.S. Women’s National Team roster for the 2022 Americas Cup, “We have a great group of athletes we are taking to Brazil. The roster includes a balance of experience, which includes a group of five players that will gain their first international experience.”

The final roster includes six Paralympians, all which are coming off a bronze medal performance at the 2020 Tokyo Paralympics. The roster will include five athletes making their debut on a U.S. roster. Though young in age the roster does bolster international playing experience at both the Senior and Under 25 National Team levels.

Rose Hollermann (Elysian, MN) is the veteran on the roster and has been a member of the 2012, 2016 and 2020 Paralympic teams, winning gold at the 2016 Rio Paralympics and bronze medal at the most recent 2020 Tokyo Paralympics. Hollermann has vast experience on U.S. rosters for Americas Cup, Parapan American Games, World Championships (both Senior & Under 25) and other IWBF competitions. Hollermann currently plays professionally in Spain, is changing teams next season and will be playing in Germany.